Ship "Imperia" – one the biggest and most comfortable cruise ships on the Baikal Lake.

The route of 6-days cruise includes the top Baikal attractions. The most of them can be reached only by water.

Endurance of a ship - 12 nights

Select a date to view the cabins 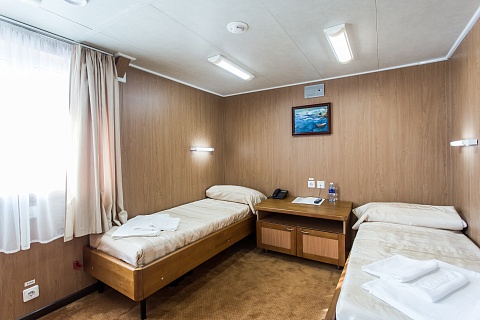 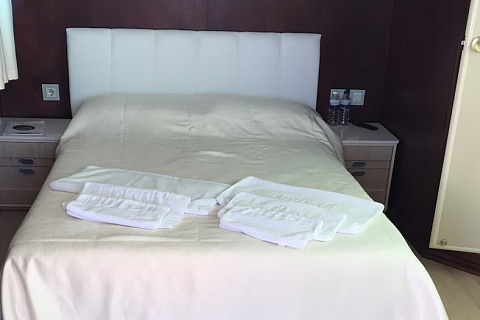 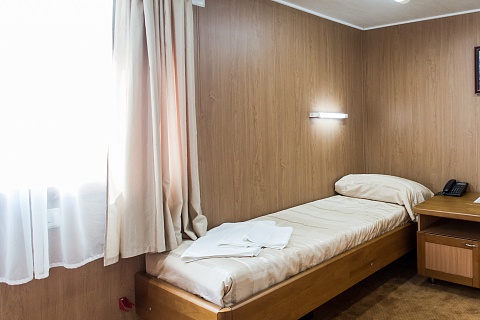 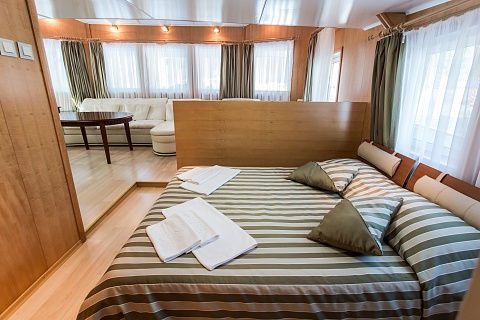 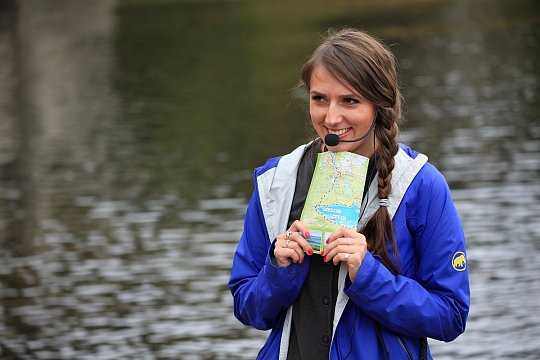 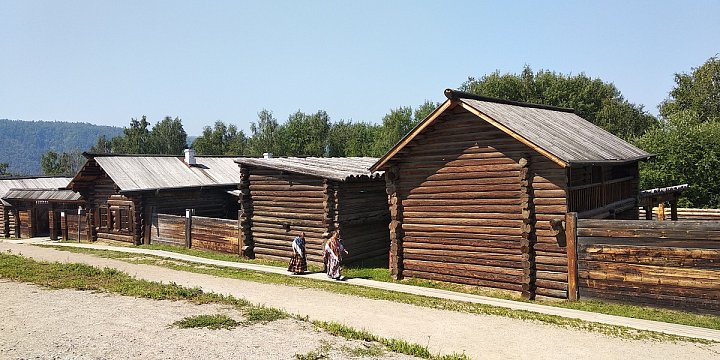 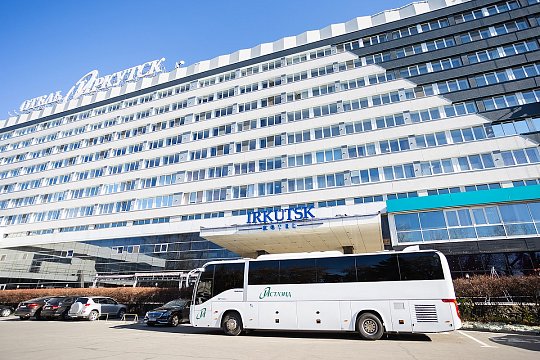 Lake Baikal has 26 islands, of which Olkhon is the largest. Resorting to poetic images, we can say that the Baikal is the blue heart of Siberia, and Olkhon is the heart of Baikal. The island is the geographical, historical and sacred center of the lake - the center of ancient legends and historical traditions. Located in the Central part of the Lake, close to the greatest depth mark (1637 m), at an equal distance from the northern and southern extremities of the Lake, Olkhon concentrates all the variety of natural landscapes of the Baikal shores on its territory. Even its form resembles the shape of Lake Baikal. There are steppe landscapes with bays deep into the land and well heated in summer; Aeolian sand areas with dunes and hills, rare for the Baikal region; mixed deciduous forests with relict spruce forest areas, picturesque rocks on the shore of marble, densely covered with red lichens. Olkhon Island is a real reserve of amazingly diverse landscapes and majestic landscapes for wildlife lovers and photographers.

Arrival in the Small Ushkany Islands.

Access of tourists and ship mooring to the Small Ushkany Islands is limited by a three-kilometer nature protection zone of the Barguzinsky Nature Reserve. The Islands are very beautiful, composed of colorful marbles and at the same time the small Ushkan Islands are seal rookeries (within a direct view you can count up to three hundred seals). We will definitely visit these Islands and admire these beautiful Baikal seals. The Ushkany Islands were given the status of a natural monument. A permanent weather station and a cordon of the National Park are located on Big Ushkany Island. Isolation of the islands from the mainland significantly affected the development of wildlife. One of the most interesting phenomena of the islands are anthills. For the density of anthills, Big Ushkany Island has no equal in the country,18-20 anthills per 1 hectare, and their total number is several thousand. Visiting the Ushkany Islands is possible only with the permission of the Park administration.

Optional visit to a seal rookery if the weather is fine and if seals can be seen (payment in cash on spot).
Departure to Zmeinaya Bay, Chivyrkuisky Bay (Zabaikalsky national park).
Breakfast on board.
Lunch on board.
Arrival in Zmeinaya Bay, Chivyrkuisky Bay. Disembarking by boats, if the weather is fine (takes 30-40 min). Bathing in hot springs and swimming in Lake Baikal. Free time on a sand beach.

Zmeinaya (Snake) Bay is famous for its hot springs that pour out in several places on land and under water. The Bay name is connected with the non-poisonous coluber, which sometimes appear here. Spring temperatures range from + 32 to + 45 °C. The water is bicarbonate-sulfate-sodium, with the smell and taste of hydrogen sulfide, with a fluorine content of 10 to 23 mg/l. The spring is used to treat radiculitis and diseases of the musculoskeletal system.

Embarking by boats (takes 30-40 min).
Dinner on board.
Departure to Svyatoy Noz Peninsula.
Quiz “Sacred Lake Baikal”. DVD films and table games in a bar on the main deck.
Departure to Cape Shartlai.

Arrival at Cape Shartlai. Optional seasonal fishing from the deck (August-September).
Fishing is arranged if the weather is fine. If fishing tackles are damaged by a tourist, he/she is obliged to pay the damage to the cruise administrator on spot.
Breakfast on board
Disembarking by boats if the weather is fine (takes 40-60 min).
The ship departs to Khuzhir (no guests on board).
Automobile tour “Places of power” to Cape Khoboy (UAZ vans).Lunch-boxes are taken from the ship.
Route: Uzury- Cape Shunte (left) – Cape Khoboy – Cape Sagan-Khushun (Three Brothers Rock) – Peschanaya (Sand) Valley - Khuzhir.
Length – 100 km. Route difficulty – easy.
Dinner on board. Departure to the holiday center “Baikal Dunes”, Academicheskaya Bay.
Free time. Sauna on board. DVD films and table games in a bar on the main deck.

Arrival at the holiday center “Baikal Dunes”, Academicheskaya Bay.
Breakfast on board.
Disembarking.

The holiday center "Baikal Dunes" is located 280 km from Irkutsk, on the territory of the Pribaikalsky National Park. A well-groomed territory and comfortable beach area, combined with new wooden cottages, is organically inscribed in the landscape of Akademicheskaya Bay; and it leaves a good impression. Surrounded by cliffs and beautiful Siberian taiga on the one side, and Lake Baikal on the other side, the holiday center offers comfortable accommodation in one of the most beautiful places on the Baikal. Everything there creates a great mood: taiga slopes of the Primorsky mountain ridge, numerous large and small rocks, Siberian cedars, larches, the cleanest beach of small quartz pebbles.

An unforgettable excursion. It includes a visit to Peschanaya (Sandy) Bay, Babushka Bay, Bolshaya Kolokolnya (Big Bell-tower) Rock .Peschanaya Bay is famous for its 750 m long beach beautifully framed by Bolshaya Kolokolnya and Malaya Kolokolnya Rocks. You will see the famous stilted trees, from under which the Lake winds constantly blows away sandy soil. They grow on a slope in the northern part of the Bay. These are pines and larches that have risen above the ground on the roots-stilts above a human height. Going down to Babushka Bay, please pay attention to Cape Ded (Grandfather). From the trail, it becomes clear where the name of the Cape comes from. A trail laid through the thickets of Daurian rhododendron, connects these two bays.
Peschanaya Bay is one of the most famous and picturesque places on the Lake. It does not leave anyone indifferent. The name of Siberian Riviera is also fixed for the Bay, and it is declared a natural monument. As if the Creator, decorating the shores of Lake Baikal, felt here some inspiration and sculpted rocks, smooth mountain slopes and the right semi-oval of the Bay beach with special love, harmoniously placing it all on a small space of the Baikal coast. The bay climate is mild with a large number of sunny days a year. This is the only place in Eastern Siberia where the average annual air temperature is positive (+0.4°C).

The ship arrives in Listvianka.
Breakfast on board.
10:00     Disembarking in Listvianka, VSRP pier. End of the cruise.
Transfer: Listvianka-Irkutsk, hotel “Irkutsk”.


Landing and boarding are made with the help of boats.

Sorry, it is impossible to guarantee good weather, no winds or no waves. We try very hard to follow the stated program. However, the weather can make adjustments to our route. The captain of the ship is responsible for your safety during the cruise, so the final word in the decision on any route change is always on him.
Route on the map
ListvyankaIrkutskChivyrkuisky BayThe Taltsy MuseumKadilnaya Valley Ogoi IslandThe Ushkany IslandsPeschanaya Bay
Other cruises 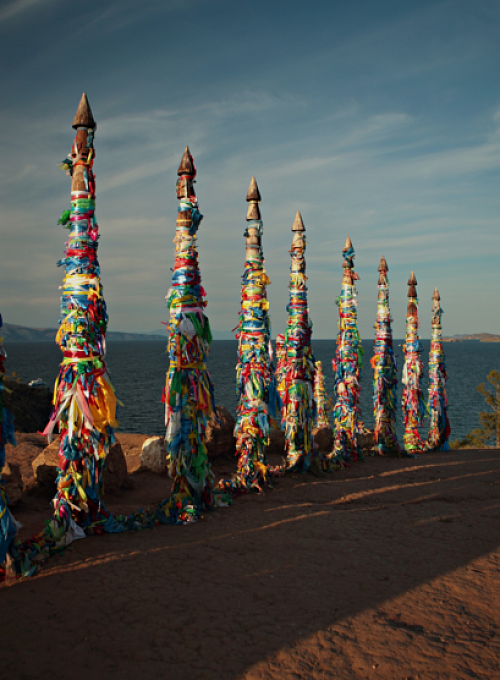 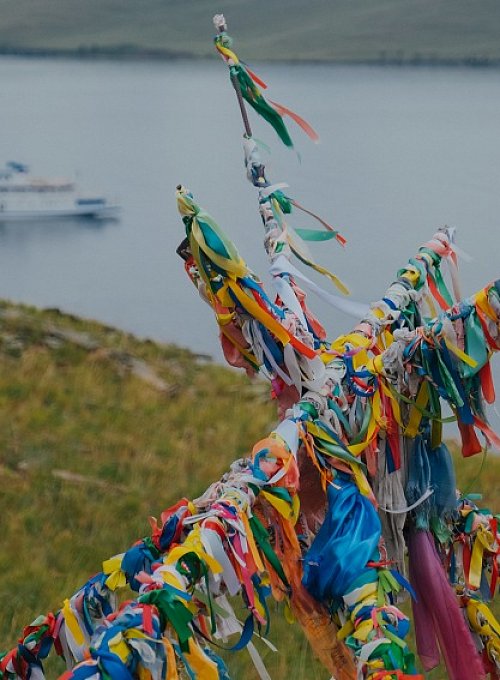