Olkhon is the largest island on Lake Baikal. It is called the "heart of the Baikal" for it is located just in the center of the lake. In addition, if you look at the map, Olkhon shape resembles the one of Lake Baikal. The name of the island derives from the Buryat word "oyhon" - "forest", although the forest is found only in the central part of the island. The length of the island is about 72 km, the maximum width – 15 km. The population is about 1500 people. At the peak of a tourist season the number of people, of course, is much more.

The Buryats believe that the most menacing spirits of Lake Baikal inhabits the island. According to a legend, HotoBaabai Khan came down from heaven and chose his earthly castle on the island, to sit in judgment over people. His son, the white eagle, first received the shaman gift long agoand he has been guarding the island since.

Olkhon Island is a part of the Pribaikalsky National Park. There are no paved roads on the island, the terrain features allow you to move comfortably only on SUVs. Olkhon is a very popular tourist destination. There are many hotels, holiday centers and guesthouses on the island to meet any taste and budget. However, it is recommended to book accommodation in advance.

The deepest point of Lake Baikal, 1637 m, is located not far from the northeastern shore of Olkhon.

Tourists go to Olkhon to enjoy beautiful nature and collect incredible energy of Lake Baikal. This is the center of Buryat and Central Asian shamanism, there are many sacred places, including one of the nine shrines of Asia – Shamanka Rock. According to local legends, the first Buryat shaman received his gift on the island.

Lots of houses on the island have holes of 15x15 cmin the fences. Guess why?

Olkhon is located 300 km from Irkutsk. You can get to the ialsnd by car or public transport. From May to December, ferries connect the island with the mainland. At the peak of the tourist season in July and August, even three existing ferries are not enough, and queues appear at the crossing. Therefore, tourist groups usually use a three-stage-transfer: by bus to the crossing – ferry – transfer to a hotel by colorful local minivans – UAZ. The transfer from Irkutsk to the island usually takes 6 hours and more.
In winter, there is an ice crossing (February-March), cars and vans can pass it on the ice. In the off-season (January, April) small hovercrafts –“Khivus” carry out crossing to the island. In winter, all the way from Listvyanka to Olkhon Island can be done on the ice of Lake Baikal. It takes about 8 hours and allows seeing great Lake Baikal beauties and legendary Baikal ice.
In summer, you can get to Olkhon from Irkutsk and Listvyanka by the scheduled hydrofoil "Cometa" (www.vsrp.ru) twice a week. The journey from Listvyanka takes only 4 hours. By "Cometa», you can also take "Olkhon for a day" tour, despite the impressive distance from Irkutsk.
Olkhon can be reached by helicopter for 1.5 hours (there is an airfield in the village of Kharantsy). Olkhon is also a must-see and must-visit for Lake Baikal cruises.

- Go to the famous Cape Burkhan and see the most recognizable natural Lake Baikal monument– Shamanka Rock. It is worth visiting at sunset – the view is stunning and catching.
- Tie a “hadak” (a piece of fabric where each color has its own symbolic meaning) on a wooden post (“serge”) on Cape Burhan and make a wish. The most popular color is blue. It symbolizes peace and harmony.
- Relax on the long sandy beach of Saraisky Bay
-Take a tour around the island – to the North of Olkhon, to Cape Hoboy, or to the South of the island. Excursions are conducted on UAZ minivans and usually take 6-7 hours.
- Listen to beautiful Buryat legends. Olkhon is the heart of the ancient Buryat myths and legends. Any iconic place on the island has its interesting story.
- In winter – travel around the island on beautiful ice. There are places with the famous "bubble" ice, as well as ice grottoes and splashes.
-In summer – take one of the water excursions around the island.
- Try the Buryat cuisine – “pozy” (meat stuffed dumplings), “buhler”(mutton soup), “tarasun”(alcohol beverage), “salamat”(boiled sour cream with flour and salt) 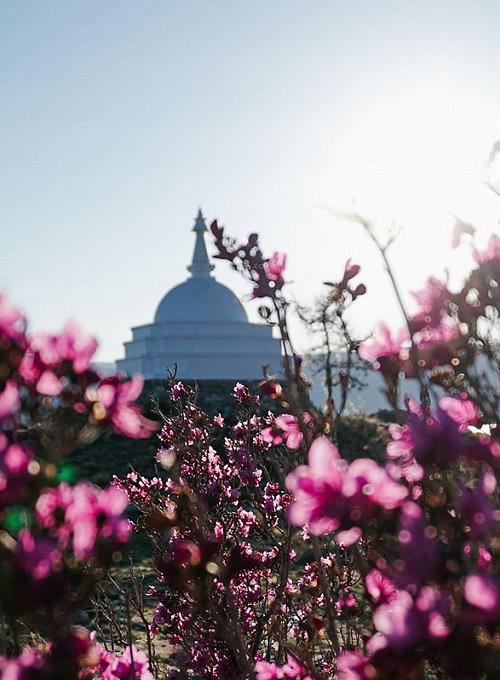 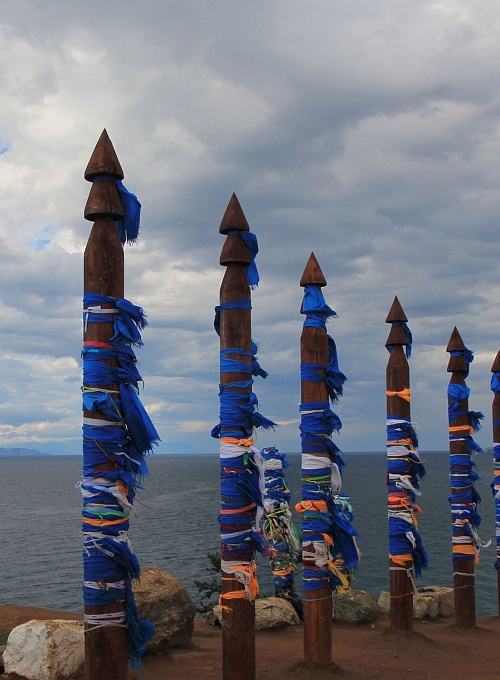